From 80’s Post-Punk era to present day London Subcultures are presented at ICA‘s major exhibition inside the Selfridges department store in London. The exhibition is made out of specially curated vitrines and  video installations. It covers multi-disciplinary collection of art, fashion, graphics, craft and design. The exhibition captures the period when London underground scene entered into mainstream. Furthermore it is aiming to answer the question of what is the alternative scene of the London counterculture today?

The exhibition space is off-site from ICA at the The Old Selfridges Hotel in an industrial, raw space above the Selfridges Food Hall. It is as striking a contrast  compared to Selfridges as a subculture theme should be.

The exhibition gives great insight into the strenght of the alternative scene, which has been a force behind London gaining it’s status as a design capital of the world. The rich variety of memorabilia of the vitrines which function like 3D mood boards provides evidence for mixture of influences and raw energy of creativity. However in my opinion the time period is almost too long to cover in small vitrines. Eventually they become slightly repetitive. I think it would have been enough to show the strongest era before 2000. 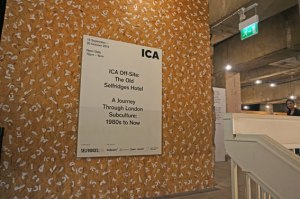 The exhibition also includes a program of films and talks explaining e.g. the differences of creative industry challenges between now and then. One very noticeable fact is the increasing speed from an idea to product. Today’s markets require designers to be professional enough to enter products to markets very fast, compared to the past when there was much more time to discuss and debate about ideas.