The design exhibition at V&A museum in London includes a wide range of industries to reveal directions for near future innovation. The content of the exhibition is presented in four areas: Self, Public, Planet, and After Life. 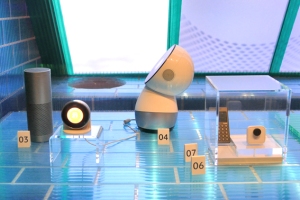 Exhibition brings together technological break through products of recent years together with new innovation. 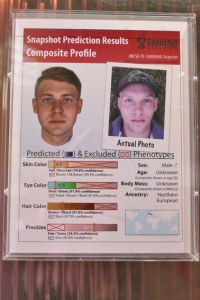 The first theme Self is about boundaries of humans and technology, and how they will merge together in the future.

One of the examples is about use of technology in genetic profiling. We can already determine a profile based on criminal’s DNA , but how ethical is racial and gender profiling.

The second part called Public is questioning democracy, and whether it still works.

The example is about fake news during a Brexit campaign. Vote Leave campaign distributed 4.2 million leaflets claiming it was an official view of the NHS (National Health Service) to support Brexit.

The exhibition has a heavy emphasis on the role of technology. There are familiar examples of using technology in the city and transportation context e.g. self-driving cars.

Uber uses algorithm to connect drivers to passengers and sets the fares and rates.

Uber Eats assigns jobs to couriers via smartphones. In this way the digital managements removes the human contact between drivers and employer.

It is a direction towards removing humans and replacing them with robots.

The third part Planet is possibly the most interesting for someone, who is already quite familiar with product development. It explains the planetary scale of innovation by asking should the planet be a design project. It shows the real power and impact of design in a large scale.

Examples include mini satellites and SatNOGs which are open DIY systems that allow anyone to observe and communicate with low orbiting satellites. One is currently on the roof V&A.

The last section called After Life poses an important question: who wants to live forever. It gives examples of humans desire to lengthen life span, but also how to preserve genetic information to future generations.
This exhibition is quite tech heavy, and it takes time trying to learn what the examples are about. Dividing the content to four areas is very useful for the viewer.
What would make an even more inviting experience for the viewer would be to emphasise the human side of innovation and concentration on impact and implications to future generations.

How Persona Stories Can Shift Behaviours

How to Use Scenarios to Design for New Normal