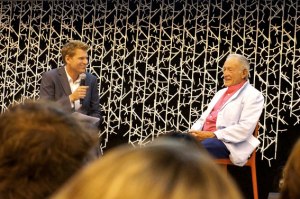 It is a big year for Richard Rogers as he has turned 80 this year. A major exhibition at Royal Academy ‘Inside Out’ celebrates his life work. I attended his interview during London Design week to hear about his values of humane ethics, sustainability and democratic design approach. Rogers has been celebrating the periods of change during his long career. He emphasised the importance of adaptability of change that the buildings must have.

As a son of a doctor and a pottery maker, Rogers thinks that an architect is a mixture of a scientist and an artist. The beginning of his career was problematic, since Rogers is dyslectic, but the condition was not well recognised in those days. Today Rogers is an ambassador for Dyslexia. However, he was capable of converting his struggles to success by understanding early on the art of collaboration. Rogers is a big fan of team work and equality. His staff is in a profit-sharing scheme and significant contributions to charity, with staff members nominating the charities of their choice.

According to Rogers philosophy the buildings should not have distinct borders of public and private spaces, instead they should be intermingling.  To him it is more about the space design than the actual building. This philosophy is evident already in his first famous creation with Renzo Piano the Pompidou centre, where his aim was to make the space more open and public. Rogers desire is to open up public buildings like jails, which should be designed more for rehabilitation.

His future view of London planning is that there should be more places for people to meet, continuing the important coffee house culture. There should always be squares, parks and other people friendly areas to encourage community spirit. The city should be based on it’s people.