Richard Mosse is best known for his unconventional and original style of Infrared photography that has made him one of the most talked about photographers at the moment. Already we can see his influence in e.g. photographers using the easily recognisable exaggerated magenta tones in the latest fashion shots. 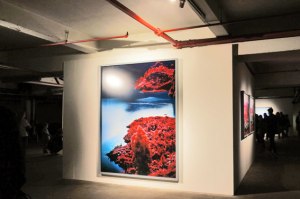 I saw Mosse’s work first at the Photographers Gallery, where he is one of the candidates for this year’s Deutsche Börse Photography Prize 2014. He is nominated for his exhibition The Enclave at Venice Biennale, Irish Pavilion.

However, his main body of work was exhibited at the same time also in the Vinyl Factory Space at the Brewer Street Car Park, which proved to be a perfect location for the grim and dark subject matter of photography about war.

Nothing could have however prepared me to see the power of his work on film. It took the work into another level, by bringing the war alive in a strange, dystopian colour fantasy. The intense, saturated beautiful pink, purple and aquatic colours created by infrared film changed the reality into a scary, intense dystopia.

The reason why the colour manipulation work so well, is that it highlights the changed reality of horrors of war. Even if you never experienced war, you can start to image the terrifying strangeness that is possesses.

It is actually a relief to see the film as a collective experience. The underground space with multiple screens was completely silent, only filling the sounds of the incredible sound effects on the film.